Pothos vs Philodendron: What's the Difference?

What exactly is the difference between pothos vs philodendron? We answer it here! Keep reading to learn more.

Kiersten lives in New Orleans, LA and graduated with her masters degree in Ecology and Evolutionary Biology from Tulane University in 2019.

She has conducted or assisted on research studies covering trees such as the bald cypress, swamp maple, and water tupelo, as well as important marsh grasses including Juncus, Spartina, and Phragmites.

Kiersten is a certified Louisiana Master Naturalist and regularly volunteers with local community gardens and nonprofits to help restore critical ecosystems along the Gulf Coast.

Environmental Needs of a Pothos

It’s true that both Philodendrons and Pothos plants are extremely popular for newbie gardeners that are just digging their hands into some soil, so to speak. They are both hardy plants, they both don’t require a ton of light to thrive, and they’re both quite pretty to look at since they are both vining houseplants and can be shown off in a variety of different ways. Also, both Philodendron and Pothos are toxic to cats and dogs. This is something that new gardeners should really keep in mind before getting their hands on one of these lush vines.

But just because they share similarities, that doesn’t make them the same! While getting them confused is a common error, the two are actually quite different, once you know what to look for.

Some of the differences are subtle, while others may be more obvious. But learning the differences of Pothos vs Philodendron plants is key to telling them apart. Keep reading as we guide you through what makes them each unique! 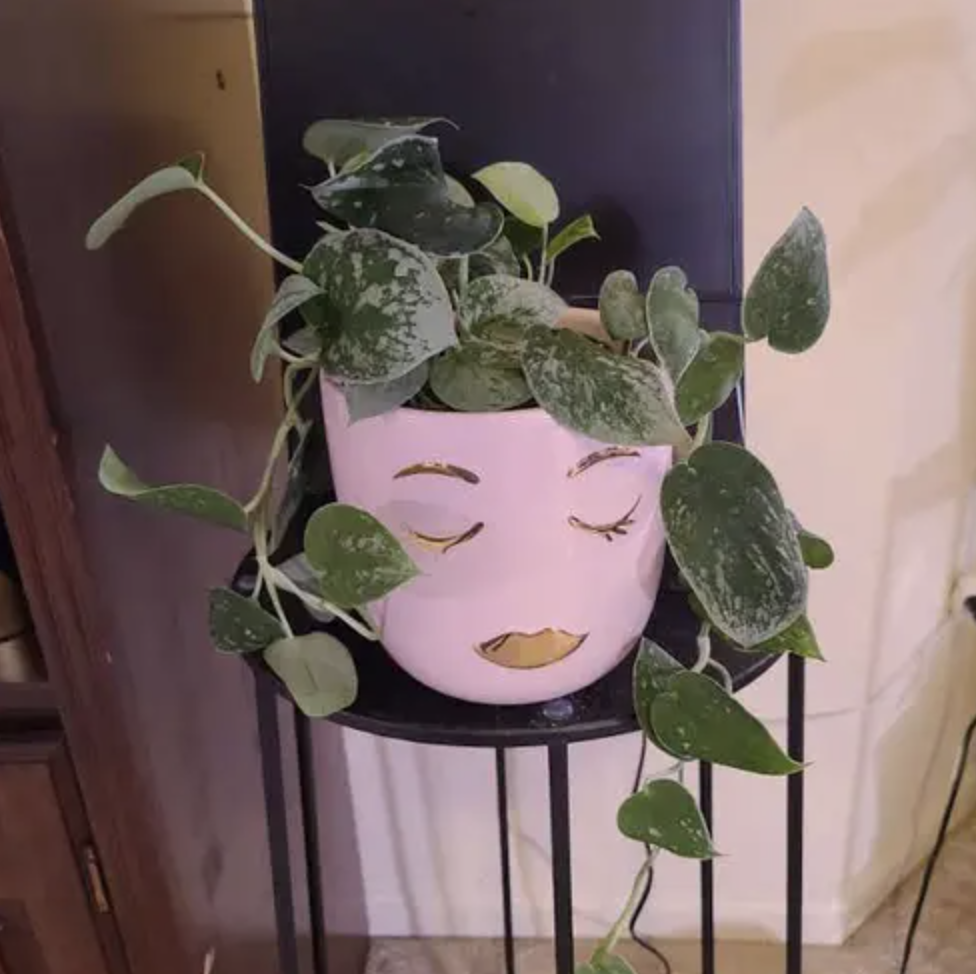 Philodendrons are tropical plants that come in a variety of leaf shapes and colors. The most common variety is the heart-shaped Philodendron, to the point where it is actually considered the standard version of Philodendrons.

This vining plant grows quickly and requires lots of food to nourish its dark green leaves. Philodendrons can live just fine in low-light conditions and even withstand temperature variations as well, without causing significant damage to the houseplant.

There are many types of Philodendrons available on the market today, including a stunning plant called the Philodendron Brasil. It’s characterized by a lighter green stripe down the middle of the leaves.

Another lovely find is the Philodendron Mican, which has velvety and luxurious leaves, making them quite unique from their brothers.

The Pothos plant is also a tropical vine. A Pothos vine is characterized by its shiny leaves, often seen with white, gold, or yellow markings on them.

There are many different types of Pothos vine available on the market today, including Jade Pothos, Marble Queen Pothos, Golden Pothos, and more.

Typically, the leaves of a Pothos plant are waxy and smooth, with something known as a variegated pattern. Essentially it means the colors of the leaves are patchy, with lighter and darker shades throughout.

Unlike a Philodendron, a Pothos plant requires a great amount of light to thrive. They also much prefer warmer weather conditions!

Philodendrons and Pothos both belong to the same family of plants, called the Araceae. This family of vining plants tends to cling to whatever surface they gain access to, be it a tree trunk, or a building.

Additionally, the leaves of both these plants can grow to the size of an adult palm. Although both plants have a similar appearance, they still possess many hidden differences that can be understood if you know what to look for. 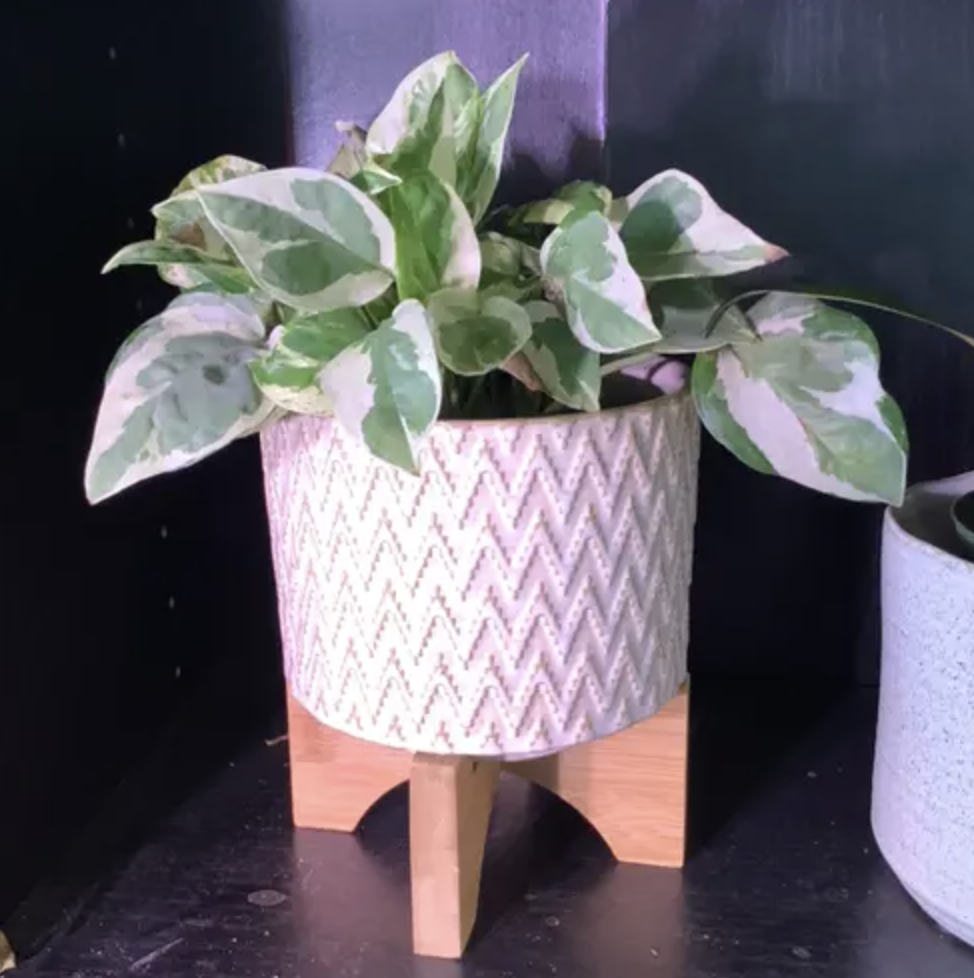 There is a separate branch of science that deals with the naming of any living thing, big or small. This field of science, called taxonomy, identifies a family name and gives it a scientific name, explaining its genus and characteristics.

In the case of Philodendrons and Pothos, they are two completely separate and distinct plants, with a somewhat similar appearance. 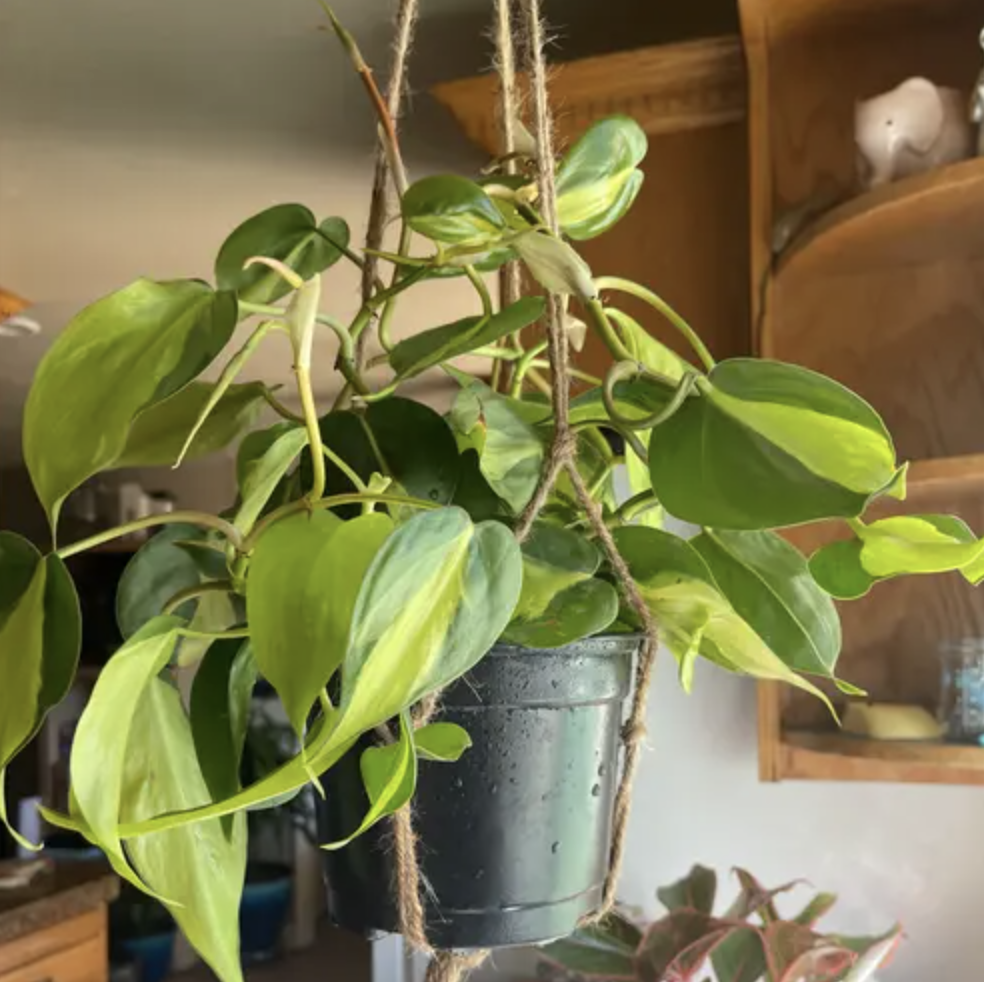 Philodendrons are often characterized by their beautiful heart-shaped leaves, while with Pothos plants, the leaves aren’t always heart-shaped.

The leaves of Philodendrons are thinner and softer than Pothos leaves, without any noticeable texture. Meanwhile, the leaves of a Pothos plant are thicker in comparison, with a waxy feel and a noticeably bumpy texture because of its leaf variegation.

Additionally, the heart-shaped Philodendron leaves feature a slight inward curl at the stem-leaf junction. Pothos leaves, on the other hand, are straight and free of any curve.

A Pothos leaf still maintains a heart-shaped appearance, but it resembles more of a garden spade than a classic heart because of the lack of a curl.

Philodendron leaves also have a more pronounced and pointed tail and are beautifully symmetrical. With this knowledge in mind, you can use the shape and texture of the leaves of Philodendron and Pothos plants to help you discern which is which.

This is another subtle difference between Pothos vs Philodendron. A Pothos plant has thicker stems when compared to Philodendrons. Additionally, the color of a Pothos stem is the same as its leaves.

Meanwhile, the color of a Philodendron’s stem is sort of a green-brown shade in comparison, with newer stems appearing more green-orange.

Another interesting characteristic that differs is the petioles of both plants. Petioles of a plant are the smaller stems that join the leaves to the main stem. When you observe the Pothos and Philodendron plants closely, you’ll discover the size and design of the petioles are different.

In the case of a Pothos indoor plant, the petioles are curved slightly inwards, toward the connecting stem. The petioles of Philodendrons, however, show a fully rounded curve and are thinner in comparison.

An even less obvious difference than the stems of these plants are the root systems of each plant––specifically the aerial roots––which can also be used to distinguish between a Pothos and a Philodendron.

Aerial roots are the roots of a vining plant that are used to climb surfaces while absorbing moisture from their surroundings. Since these are both vining plants, they both have an aggressively growing aerial root system to help them grip any surface.

The differences, however, lie in the fact that a Pothos indoor plant only has a thick aerial root per node, whereas a Philodendron plant has several smaller nodes, with thin roots that grow out of them. 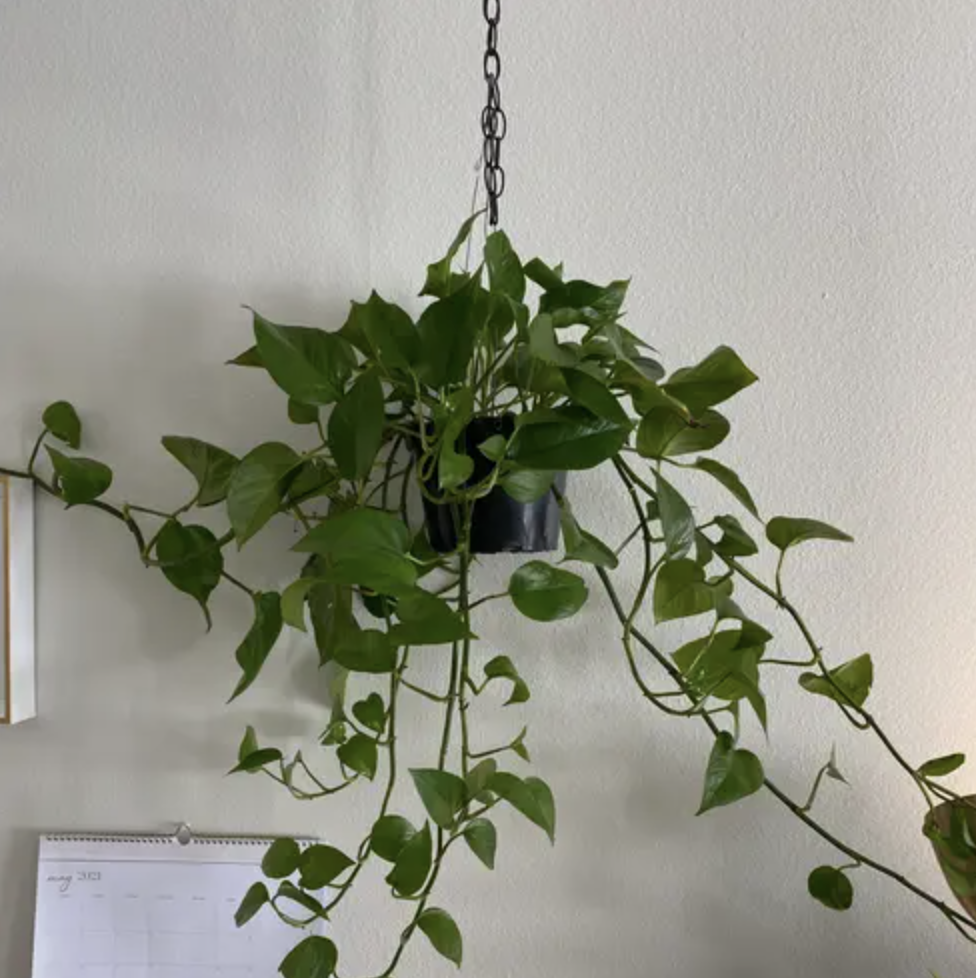 If you’ve ever noticed the growth of new leaves on both a Philodendron and a Pothos, you can clearly observe the differences between the two.

These growth habit differences boil down to one factor, called cataphylls. Cataphylls, which are thin opaque sheaths, are the small essential leaves of Philodendrons that protect and encase a new growth until it is ready to come out.

Most of the time, these essential protective leaves stay on the stem until the new leaf has unfurled. Once its purpose is complete, it withers off and dies.

However, the growth of new leaves for a Pothos plant follows a completely different modus operandi––a new leaf comes out of the current leaf.

Additionally, the new leaves on a Philodendron plant have a pinkish tint to them, while Pothos leaves are typically a shade lighter than the rest of the plant. As the new leaves of either plant reach maturity, they darken and reveal their true colors.

Most plants in the world––much like people––have similar basic needs. Water, sunlight, food, air. Philodendron and Pothos plants are no different, they both need all of the above, too.

The differences lie in how much of the above they need, and what kind they need. Philodendrons happen to need a lot of light to produce enough chlorophyll. Without plenty of chlorophyll, their ability to get enough food is hindered and their leaves may turn pale and look ill.

However, indirect, bright light is best for these beauties, not direct sunlight. Direct sunlight can be counterintuitive and cause more harm than good.

Pothos plants also prefer bright, indirect sunlight for several hours a day and are known to thrive under higher temperatures. They can even withstand some mild direct sunlight for short periods of time, but be careful not to keep them there too long.

In terms of water, Philodendrons are more dependent on water than a Pothos plant, since Pothos plants are slightly more drought-tolerant.

However, proper watering for any type of plant can be a bit of a guessing game if you’re new to the plant world. Be sure to consult our plant care app for helpful tips that can guide you on creating a healthy watering schedule for both Philodendrons and Pothos plants, sans the confusing water meters and guesswork!

Also, don’t forget that their soil needs, though similar, do vary somewhat as well. Philodendrons do best with moist soil, while Pothos plants definitely perform better with more arid soil.

While many people often confuse Pothos vs Philodendron plants, as you can see there are quite a few ways in which they are uniquely themselves and different from one another.

Sometimes it does take a keen eye in order to spot those differences, but hey––the more you learn, the more you know! Stick with us and you’ll soon be more knowledgeable than you probably ever wanted to be about all things plants.

What are the Different Types of Pothos?

Wondering what the different types of pothos there are? Check out our comprehensive guide on all you need to know about this house plant.

Why Your Pothos Leaves are Turning Yellow

Not sure why your pothos leaves are turning yellow? Keep reading to learn about the most common causes to yellowing leaves in Pothos today.

Are Pothos Toxic to Cats?

Are pothos toxic to cats? Discover all you need to know about toxicity levels in pothos to keep your cats safe.

Looking for the best tips and tricks for neon pothos care? Check out our helpful guide on all you need to know about caring for this house plant.